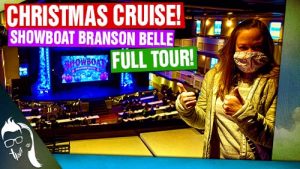 John and Amy take you on a full tour of the amazing Showboat Branson Belle on one of their Christmas cruises on Table Rock lake!

The Showboat Branson Belle is a MUST DO when visiting Branson, Missouri, especially during the Christmas season! 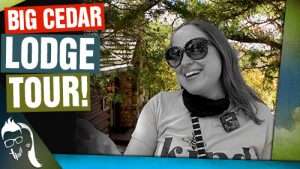 John and Amy take you on a tour of one of the Branson, Missouri region's premier resorts, Big Cedar Lodge!

You'll see the beautiful grounds, visit a restaurant, see some incredible cabins, visit the gift shop and check out the massive Fun Mountain! 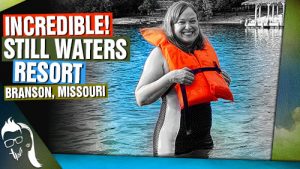 John and Amy take you on a tour of the INCREDIBLE Still Waters Lakefront Resort in Branson, Missouri, just down Indian Point Road from Silver Dollar City. It sits right on Table Rock Lake and the marina has everything from jet ski rentals to pontoons!

Branson is a premier destination for those looking for nature, lakes, golf, go carts and other amazing outdoor attractions and things to do!

John and Amy take you on a tour of the beautiful Branson, Missouri area and cover some of the best of the best things to do outside in the fresh air.

These days many people are looking for things to do that aren't in cramped indoor spaces. This video reveals some Branson favorites including Table Rock Lake, Top of the Rock, Silver Dollar City, Shepherd of the Hills, Dogwood Canyon, horseback riding, fishing and MUCH MORE! 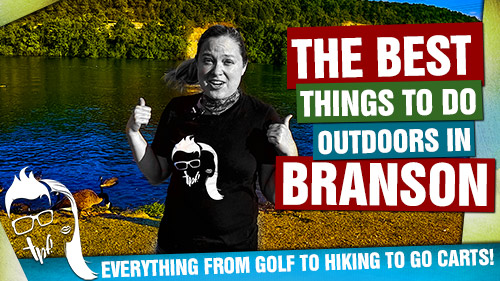 You don’t want to miss the BLOOPERS at the end!

People leave some of the funniest reviews online and we're going to look at some of them right now!

Hi everyone, this is Amy.

And this is John. And we're with TPF! Trips, Places and Fun! And today we're going to discuss some of the funny reviews left about Table Rock Lake and Table Rock Dam here in Branson, Missouri. Table Rock Lake was formed in the 1950s when the Table Rock dam was built. So the lake spans 800 miles of shoreline and over 50 thousand acres. So we're going to just take a look at some of these reviews. The lake is really, really beautiful. The dam, when they open the floodgates, you've never seen anything like that. Alright, so we're gonna look at some of these reviews and I'm gonna go through some of these here and share some of them with you and we will see what they have to say.

So these are reviews from review sites like TripAdvisor, Google, Facebook and so we're going to be pulling those up and taking a look, see what we can find. All right, so first we're gonna talk about Table Rock Lake. We have a five-star review. This one says it's one of the most beautiful lakes I have seen, fishing, tubing, skiing or just float and tan. Tons of fish and fun.

It's true, one of our favorite days of the year is when we rent a boat, we'll do it once a year and spend the whole day and tubing and swimming and huge fun.

Here's another five star: This lake is absolutely and most likely overlooked by Branson area visitors. That's true, a lot of people come to Branson for all the fun and stuff. In my opinion it's one of the top reasons to come to Branson.

Alright, now this reviewer only gave three stars. Their reasoning was that the water was high and this is an overwhelming lake that's just too high and it ruins the whole experience. Take off a couple stars because the lake is too high and I'm hoping that they'll correct that someday. Two stars, he will spend ten minutes at least it's not that big. Okay, it's big. This thing is huge, its massive, eight hundred miles of shoreline. Oh we're going crazy on this one, wait ten minutes, non no. We're passionate about this point! I don't know why but we are. It's huge, its massive, it's, it's, I think the shoreline is is longer than the entire coast of California.

Hey, here's another one, two stars. Two stars, which is a poor rating, that's bad, read because it was hard to find. Hard to find. I don't know what to say.

So now let's check out some reviews for Table Rock Dam. Five stars: we enjoy being able to drive across the dam and take in everything, it is truly a piece of art and well worth checking out. I'm gonna have to agree. We did that today. We drove over the dam. It's a beautiful, beautiful drive. Five stars: we always stop by the day at the dam in Branson, great history behind the dam in Table Rock Lake and an architectural marvel. Again, agree, it's beautiful. Marvel. Stunning.

All right, now this one only gave three stars: a large concrete structure but if you have seen one dam that you have pretty much seen them all. Hmm that's really sad that they didn’t have a good experience. Yeah, I mean it's an architectural marvel but this one says it's just like all the others.

All right, this one is three stars: also it looks like any other dam but good to see they're damn close to the fish hatchery which would be good for the kids. I see what she did there. Be careful. Family show.

Alright, so now let's see what people have to say about the Fish Hatchery. it is, it's, it's a lot of fun to take the kids, not for a long time, but for just up maybe 30 minutes, an hour at the most. But to go to the to the bottom of Table Rock Dam and that's where fish, you'll see, I don't know how many thousands and thousands of fish and all of these, I don't know what you would call them, aqueduct, is that, maybe not, but but but containers of water in the ground, and that's where fish are. They grow and as soon as they grow to a certain length they are released into Lake Taneycomo. Lake Taneycomo is a cold water lake, it's at the bottom of the dam on the other side of Table Rock Lake, and Table Rock Lake is a warm water lake so you're gonna have bass and crappie and different types of fish, bluegill, but in Lake Taneycomo, trout, it's a cold water fish, cold water lake.

And so the fish hatchery produces and 400,000 pounds of trout in here. Trout are not native to Missouri so it's great that they have a fish hatchery here in order to be able to feed Lake Taneycomo. So let's see what people have to say about the hatchery. Five stars: Much to do and learn about here. Our daughter loves checking out all the animals both dead and alive. So children are going to love seeing everything dead and alive here. Five stars: had a blast at this location and our grandchildren enjoy feeding the fish. We fed the fish today, hopefully we have some video of that, it's pretty crazy. They throw the food to the fish and they just go crazy.

In a town that seems to suck your wallet dry this place is a nice little spot for some short free entertainment. This one says three stars: Since it's a fish hatchery you can't expect a lot of excitement. I don't know what they were expecting but, yes, there's fish. And you actually get to walk through, not big, but a little like a Welcome Center, there's, there's fish in tanks, there. Two star review: I think there are some fish. What we have, then give more stars, less fish, different fish, other than all I got something other than fish, at the fish hatchery, that would have been all right.

Thanks guys! We really hope that when you're in Branson you will check out Table Rock Lake and Table Rock Dam and the Fish Hatchery and decide for yourself. If you have any comments about Table Rock Lake or Table Rock Dam for the Fish Hatchery please comment in the section below and we hope that we've given you some great things to think about. Give a thumbs up, subscribe, and the other one, ding that bell! Alright guys, safe travels everyone! So sorry about this one.

okay, okay, yes you break, in with that comedy. okay, ready y-yeah yeah you know sometimes he looks at me for a witty retort I'm waiting for the humor. sometimes I have nothing, nothing, sometimes it's better if I do have something to not say it. oh yes, yes, and not just about the dam. no we gotta redo that, oh yeah, all right, that's good over okay so they actually hatch trout at the fish hatchery which we found outfit they hatch trout I guess they like it like like a dinosaur egg um they breed, that they throw them, then call it, anyway, they grow, they house, bing brought into this world, so they they put them in Rock Lake, Taneycomo, they would die. Is that all that we have today for our fine friends? Well, I, wow, that went so fast. I guess we were just having so much fun, it's just, BAM, it's over. 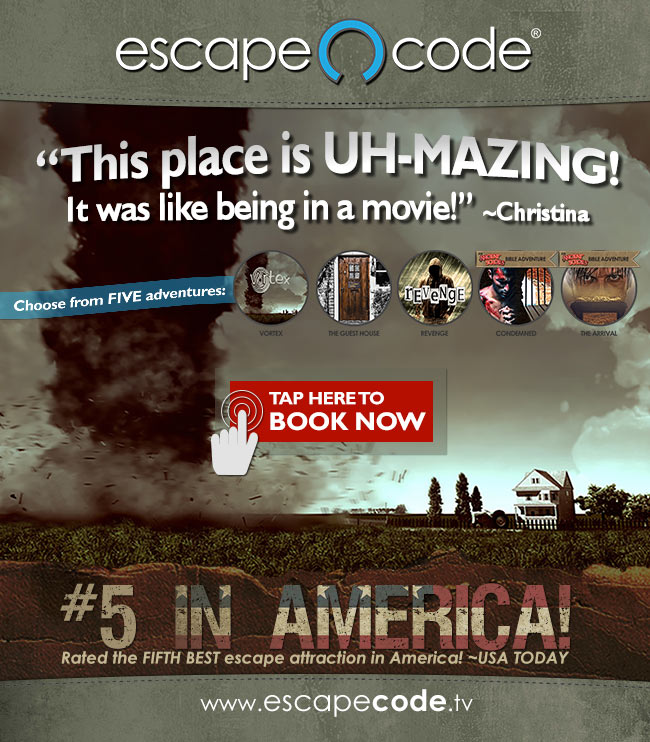 Looking for the perfect date night (or day) activity for couples?

Branson is full of fun choices for couples to enjoy on vacation!

While families and children have a blast here in the Ozarks, couples can have just as much fun!

Of course, in addition to all of the other exciting places in Branson, Escape Code is a perfect attraction for couples to enjoy together!

You can BOOK YOUR ROOM online right now!

Here's a list of some of the best attractions for couples in Branson, Missouri:

BOOK your experience at Escape Code, one of the TOP ATTRACTIONS in Branson, Missouri, HERE

Top 10 Things to do in Branson

You can easily spend weeks in the Branson Ozarks without exhausting everything you can do here.

There are more than ten things that the team at Escape Code loves in Branson, but we compiled a list of ten of our favorites.

Of course, Escape Code is a favorite of many and we'd love to invite you to play!

You can BOOK YOUR ROOM online right now!

Here's our most up to date list of our ten favorite attractions in Branson, Missouri:

BOOK your experience at Escape Code, one of the TOP ATTRACTIONS in Branson, Missouri, HERE!